Home » features » News » In keeping with the season: An autumn reading list

Leaves are changing and temperatures are dropping; what better time to look up a good book? Fall is my favorite time of year! I could read books that remind me of this season all the time, but there is something special about pairing my reads with the colors on the trees. Whether your taste leans toward pumpkin spice or spooky, I hope you’ll find a new book in the list below.

Let’s start with something supernatural to get us into the spooky mood. You may have heard of Lovecraft Country as a new HBO series, but did you know it’s based on a cult classic novel by Matt Ruff? The main characters in this book face both real-life monsters and supernatural ones as army veteran Atticus sets out to search for his missing father. The tale twists around family history and examines the world at large alongside otherworldly threats.

Talking As Fast As I Can by Lauren Graham

If you’re a Gilmore Girls fan, the changing colors brings you to Stars Hollow. And while you can’t actually get a coffee at Luke’s Diner, reading Lorelei’s (Lauren Graham’s) account of the behind-the-scenes filming of the show and its recent reboot is the next best thing. Graham shares what it was like to star in a show without knowing if it would become a success and the lessons she’s learned about careers and relationships that can apply to any reader.

The characters and the Pacific Northwest setting make this story a cozy one. My favorite part of this book is the way so much of it is told through letters and emails. Bee, our intelligent, 15-year-old main character, is collecting all these documents trying to piece together why her mom—Bernadette—disappeared and where she could be. Bee knows her mom is a little eccentric, and even though her dad keeps telling her that what happened wasn’t her fault, Bee is determined to solve this mystery.

Autumn brings “back to school” vibes, and this book, set on a midwest college campus, is perfect to pair with some apple cider or a pumpkin donut. A recent nominee for the Booker Prize, first-time author Brandon Taylor writes about biochemistry student Wallace who is far away, physically and mentally, from his hometown in Alabama. Wallace grapples with opening up to his friends on campus and with his community. This is a book that examines what it is like to overcome private battles.

This is a classic worth revisiting, especially if you only skimmed it in English class. Plus, if you’re missing large parties right now, it might be nice to be transported back to the Roaring ‘20s. This book is about socialite Jay Gatsby who throws huge parties at his mansion, but no one really knows him or how he made his money. He unexpectedly befriends his neighbor, Nick Carraway, who lives in a tiny house next door. While I believe the theme of the book is miscommunication, the bigger metaphors are what make this a classic.

Remember how obsessed people were with the Twilight series when it first came out? Bella Swan fell in love with vampire Edward Cullen and his “vegetarian” family (who only drink animal blood.) Get ready to jump back into that world with the recent release of Midnight Sun, which tells the story from Edward’s perspective rather than Bella’s. It’s another spooky-ish story for fall, and what better time to read about vampires? 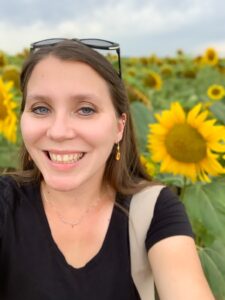 Jenna Chapman is a Stockbridge High School graduate who loves curling up with a book or listening to an audiobook on evening walks around her neighborhood in Chicago. Look for more reading suggestions on the book blog she and her partner co-author at instagram.com/neverdogear.

Jenna Chapman is a Stockbridge High School graduate who loves curling up with a book or listening to an audiobook on evening walks around her neighborhood in Chicago. You can find more reading suggestions on the book blog she and her partner have on instagram.com/neverdogear.