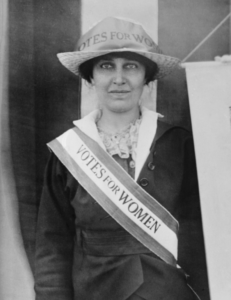 What woman, born near Stockbridge, Mich., was one of the first females to graduate from the Massachusetts Institute of Technology (MIT) in science and experienced a lifetime of tragedy? Hint: She was a leading, a national suffragette and proponent for gender equality, wealthy beyond belief, and a generous philanthropist throughout her life. Need more? This woman singlehandedly funded the development of the first oral contraceptive for women in the 1950s. If you failed to guess Katharine Dexter McCormick, you’re not alone. This remarkable local woman, who lived 1875 to 1967, remains relatively unknown.

Katharine Dexter, granddaughter to Sam Dexter, the founder of the village of Dexter, was born at her grandparents’ home in Dexter. Sam Dexter was also the first county court justice and later became a University of Michigan regent. The still-standing family home, referred to as Gordon Hall, is located just off Dexter-Pinckney road.

Katharine grew up in Chicago. There her father was a prominent attorney with reputation for winning high-profile, criminal cases and assisting the poor. At age 14, her father died of a heart attack, and then four years later, her brother succumbed to meningitis. As a result, Katherine gravitated toward a career in medicine. After three years of preparatory work specifically required of her as a woman, the bright and precocious young woman was accepted into the Massachusetts Institute of Technology, no small feat considering that in the first half of the 19th century, only a minority of American children, both girls and boys, spent any meaningful time in a classroom. An even smaller minority received any secondary education. For girls in particular the emphasis was on a “ladylike atmosphere” and “cultivation.” The first woman in the US to graduate with an engineering degree occurred in 1876.

Katharine wasn’t sheepish. According to MIT Technology Review (2/22/2011), “In 1899, Katharine Dexter walked through the cool marble halls (of MIT) as a full-fledged student—and soon proved her willingness to challenge authority. Women at MIT were required to wear hats at all times, and fashion favored ones adorned with long, dangling feathers. But that style provided a dangerous combination with the fire and fumes of chemistry labs. To the ire of the department, she not only defied her professors by coming to class hatless but upped the ante, saying that no woman should be required to wear a hat in any class. The chemistry department finally repealed the rule on the grounds of safety.” She graduated with a biology degree from MIT in 1904 .

The same year Katharine graduated from MIT, she married Stanley McCormick, heir to the International Harvester fortune. Although Stanley graduated with honors from Princeton, he developed schizophrenia, a severe form of mental illness, within two years of their marriage. He was repeatedly hospitalized for his illness and, at times, extreme behavior. Throughout, Katharine remained steadfast in her support of her husband. But conflicts arose between her and the McCormick family regarding his care. Ultimately, Stanley was housed at one of the McCormick estates near Montecito, Cali. The two-story, 8,000-square-foot home was described as a “gilded cage” with a patient of one and a crew of 50 maintenance people, gardeners, and Stanley’s attendants.

During Katharine’s time at MIT, she took up the cause of women’s suffrage and became the first woman from MIT to join the College Equal Suffrage League, an organization promoting suffrage sentiment among college-age women. From there she progressed to field organizing with other women eliciting support for voting rights in various towns and cities as part of the National American Women’s Suffrage Association. She attended and/or spoke at 97 such meetings. At one point, when the police forbade women from congregating on the beach near Boston, Katharine and her cohorts simply left the beach and spoke while knee deep in the water with their suffrage banners flying. She became a leading speaker for women’s suffrage and developed a fearless attitude towards hecklers.

In 1920, the Nineteenth Amendment passed and provided women equal voting rights. Katharine then became the first vice-president of the League of Women Voters. Subsequently, she also became an ardent advocate for a woman’s right to contraception and for women in science.

The federal Comstock Act of 1873 prevented the mailing of “any article or thing designed or intended for the prevention of conception or procuring of abortion as well as any form of contraceptive information.” Many individual states also passed laws preventing the sale or distribution of contraceptive devices or even the dissemination information about contraception. In response, Katharine became an ardent and vocal advocate for a woman’s right to information on and access to contraception. She even went so far as to smuggle personally thousands of birth control devices past U.S. Customs in her luggage as she traveled internationally.

Because of various state laws prohibiting research into contraception and many religious prohibitions against contraception, funding was unavailable for the development of an oral contraceptive.

Again, Katharine stepped forward. In 1953 she personally funded a $2 million grant to Drs. Pincus and Rock for the development of the first successful oral contraceptive.

Gordon Hall houses a secret room under its front porch that many believe was used to smuggle slaves to freedom as part of the Underground Railroad. In 1934, the home was determined to be one of the oldest and most historic buildings in Michigan. After completing renovations and making Gordon Hall habitable in 1950, Katharine gifted her home, located at 8341 Island Lake Road in Dexter, to the University of Michigan. The University gutted the hall of much of its interior finish and divided it into apartments.

Gordon Hall was designated a Michigan State Historic Site in 1958 and listed on the National Register of Historic Places in 1972. In 2005, the university sold Gordon Hall to the Dexter Area Historical Society for $1.5 million. Today, DAHS is endeavoring to renovate the estate, often hosting events and opening the building to weddings in order to raise funds for the building’s rehabilitation.

Previous: SRSLY Hosts a Virtual Movie Night
Next: Quick Start Lifts Panthers to 3-0 in the GLAC