While it wasn’t the finish they had hoped for the Stockbridge girls’ cross country team still took a big step forward by running at the Division 3 state country finals Saturday.

The girls came home with a 20th place finish as a team and had some strong individual showings to go along with it.

Junior Rylee Tolson has been the Panthers top runner all season, but had a rough time at the finals.

Tolson struggled through most of the race and in the final tenth of a mile she went to the ground, falling to her hands and knees. Not being able to get up, she proceeded to crawl the final 25 yards to the finish line to finish the race. She would finish in 173rd place with a time of 22:38. Tolson was treated at the on-site medical center and was released to her parents.

She was not the only runner to have issues on the tough course as the unseasonably warm temperatures paid its toll on a lot of runners, including the leading runner of the race who went down about the same place as Tolson. Several runners also collapsed at the Division 1 and 2 races on Friday. 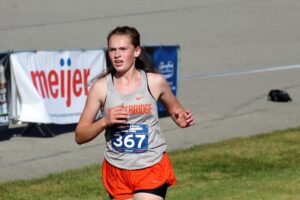 With their top runner struggling, several of the girls stepped up and placed well at the Finals. 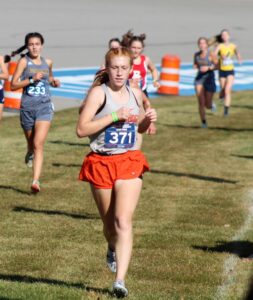 Kaitelyn Walker beat her Regional time by over 15 seconds.

The Panthers will be losing three seniors that ran their last race with Hill, Youngblood, and Killinger competing for the Orange and Black