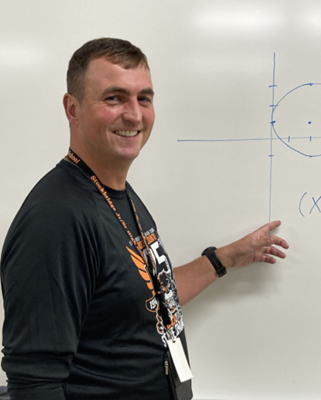 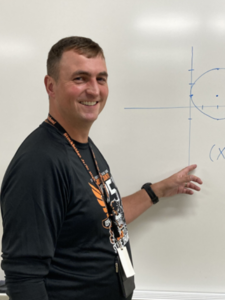 Steve Allison has been teaching for Stockbridge Community Schools for 18 years, and we can’t thank him enough for his years of service to the district. Allison knows his subject area well and has taught many kids throughout the years. Thanks to his patience and his reputation for going the extra mile, he is quite often a requested teacher in the district. He has also been the boys’ head cross country coach since 2005. Stockbridge was his first teaching job out of college, and we are fortunate he has remained here to teach and coach.

Allison has been a major influence for years in Stockbridge Schools—as a student, coach, and teacher. Yet, he remains very humble and isn’t comfortable talking about himself. When he does open up, he shares that when he was a student here, Stockbridge High School prepared him for “life after high school.”

Growing up in nearby Gregory, Allison was part of a large family of seven boys, along with his parents, Jim and Emma Allison. While in high school, Allison was a member of the 1994 and 1995 boys All-State Class B Champion Cross Country Team coached by Jim and Anita Lister.  Some may remember that last year the team celebrated their 25-year anniversary with many of the original team members, and coaches Jim and Anita Lister, getting together for another team picture.

After high school, Allison attended Spring Arbor University and graduated in 2003. While there, he met his wife Michelle, whom he married in 2004. As he settled into adulthood, things just fell into place. “When I graduated from college, there was an opening for a math teacher and a coaching position so I felt it was a good fit!”

Now, while walking around his classroom, Allison points out state-of-the-art technology, including two huge screens for demonstrating how to solve math problems. He has learned how to use the latest and greatest technology to help his students be successful in math, a subject he admits students either like or don’t like. Allison’s teaching style allows his students to feel more confident with math skills, even if math is not their favorite subject.

As a coach, Allison has applied many of the skills he learned when he was a student running cross country himself. Cross country tests runners’ stamina and their ability to adapt to various types of terrain and weather conditions. Allison has a knack when it comes to developing many star runners on a winning team. His team members develop tight-knit relationships in a family-like atmosphere. As a result, he is truly a champion coach. In fact, in 2013, the Lansing State Journal named Allison “Boys Cross Country Coach of the Year.”

“Mr. Allison is not only a great teacher, but also a great coach. He has a sharp mind and a caring heart, and he gives good advice. He is always willing to step in and help out or offer support in any way.” Trapp then added, tongue-in-cheek, “Allison’s only downfall is that he is a U of M fan!”

As for what has motivated Allison, he explained that he has “many people who have influenced my life, between past coaches and teachers as well as strong families in the community.”  He also feels strongly that “the best part of Stockbridge Schools is the people.  Many genuinely care about each other and the students as individuals and are invested in each other’s success.”

His advice to Stockbridge students: “Build relationships and learn for the sake of learning, not the grade. Be confident in your abilities and don’t be afraid to make mistakes. And always strive to be better and do better!”

Previous: Expressing appreciation for teachers and staff
Next: PAUL DOBOS, DDS FAMILY DENTISTRY—WE WOULD LIKE TO MEET YOUR DENTAL NEEDS