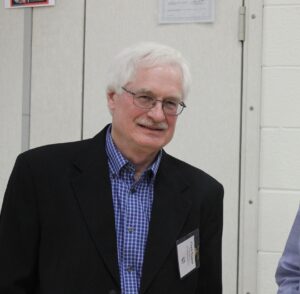 Chuck Wisman, after serving the maximum number of terms on the board of directors of the Stockbridge Area Educational Foundation—a total of 12 years—is stepping down. Members of SAEF’s board were quick to express their gratitude to Wisman for his service to the organization whose mission is to fund programs and projects that create or enhance educational opportunities for residents within the Stockbridge Community School District.

“Chuck has served as president and vice president as well as doing countless things behind the scenes,” said Jennifer Hammerberg, SAEF’s president. “He has been a key driver of the successful raffles, a careful monitor of donations and an invaluable team member for our main fundraiser the Festival of Tables.”

Wisman and wife Nancy live on a farm outside Stockbridge where Wisman grew up. He graduated Stockbridge High School before heading off to MSU and graduating with a bachelor’s degree. After receiving his master’s degree in social work from Univ. of Michigan, he worked for and retired from the State of Michigan where he served in the area of social work. 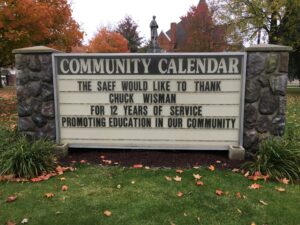 “Chuck Wisman is a homegrown community treasure,” said Bruce Wm. Brown, founding and returning SAEF board member, 2000-13 and 2016-19. “As a Lion and as a SAEF foundation member, he is always active supporting the community. If you thank Chuck for the good things he does, he may be a bit self-conscious because he doesn’t work for praise or personal gain. Chuck is intrinsically altruistic, and the world needs more people like him.”

Founding SAEF member Jill Peck (2000-2013) said, “When Chuck joined the board in 2008, he immediately made an impact and quickly moved into leadership roles on the board. Chuck’s willingness to assist in any manner needed as well as his calm, steady and wise input have helped solidify the SAEF as a lasting support for the Stockbridge Community. All who have served with Chuck on the SAEF board were witness to his dedication to this community.”

Long-term SAEF member Judy Williams, 2005-2017, said, “I had the privilege of working with Chuck for nine years. His helpfulness, good humor and ability to tackle difficult projects will make him hard to replace.” 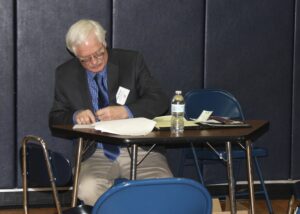 Friend and fellow Lions Club member Mike St. Dennis has known Chuck for years and describes other ways Chuck has been active in the community. “Chuck has been the Sight & Hearing Chairman [for the Stockbridge Lions Club] for as long as I can remember. For over 30 years he helped folks, through Lions, obtain eyeglasses and hearing aids. Or steer them to other agencies that could help facilitate their needs. He was also a great help to the bingo team, especially after John Ocwieja moved from Stockbridge.”

“Chuck, we are all going to miss you!” Hammerberg added. “Thank you for all you have done for your community.”

Previous: Five books to curl up with this holiday season
Next: ‘Guiding Good Choices’: A dynamic way to connect with your children