A few weeks after the start of a new school year, blackbirds start to fly overhead in ever-growing numbers, a sure sign that fall is just a cold wind away in Michigan. One Saturday of my early ninth-grade year, neighbor Larry Cobb and I were riding our bikes to town in search of candy and classmates. Directly above us, a flock of chattering, red-winged blackbirds flitted southbound in a narrow, barrel-like formation that undulated across the cool blue sky, furling with the wind.

We stopped at our intersection to determine just how big of a flock it was. It stretched as far as we could see. We mounted our bikes to ride south beneath the birds. It was always a gamble to ride into town with no money, hoping to collect enough roadside empties to stake us to a pop and candy bar. I needed six empty pop bottles to have enough for a Mallo Cup and a Coke. The milk-chocolate Mallo cup was packaged with collectible coins printed on a cardboard square. I planned to save up the required five-hundred “cents” to mail away for a free box of ten.

We were always on the lookout for bottles, dead bugs, and roadkill. Any sighting stimulated a change in conversation.

“See those coons up there?” Larry asked with a nod as he banked his bike into a corner ahead of me. A sun-swollen raccoon and three smaller ones came into view. I coasted to a stop for a better look.

“The mama got hit, and her babies stayed by and got run over, too,” he relayed from beyond the site of the massacre.

The bottle deposit was two cents, and we saved the money for treats at our one-stoplight village. Stockbridge was a small town but supported four grocery stores and four full-service gas stations. This was before gas stations started selling bread and milk and instead focused on a traveling man’s necessities, like tobacco, oil, cigarettes, and newspapers.

On hot days, the widow Bradshaw’s small grocery store was a good choice. The distinguished, white-haired lady offered ice-cold pop from a water-filled chiller near the manual cash register. Twelve-ounce bottles stood in lines of flavors suspended from long metal tracks, only their caps rising above the circulating ice-cold water. On this scorcher of a day, it was a treat to hold the bottle and most of my forearm under the water until the cold almost hurt. Mrs. Bradshaw gave us credit for a small bag of potato chips and a pop because our gleaning had come up shy. Mom would settle the bill during her next day’s visit.

Larry and I uncapped our colas using the bottle opener attached near the countertop cash register. Our bottle tops clattered like poker chips into a tin. The two drinks cost a nickel each and, with the deposit, came to 14 cents. Larry and I sat beside our bikes on the curb in the shade and savored our chocolates, chugged our Cokes, and claimed our four-cent bottle-return deposit. I stood and flicked back the kickstand of my bike, and I swung my leg over to mount up and cruise the sidewalks and alleys of our hometown.

We pedaled around and explored what was new. Part of the day trip included stopping at the ball field for a long drink from the always-on water fountain. To pass the time, Larry and I practiced squirting streams of water between our teeth and reading tracks left in the dusty ground around the fountain and the ball field. Tire tracks from cars and trucks elicited hunter Larry’s detailed interpretation of how many girls were riding as passengers, their hair color, how fast the car was moving, and the song played on the radio—a remarkable feat of deduction . After a moment’s study of the infield’s flat and dusty ground, Larry offered an opinion over the bas-relief, chain-link design of bicycle tracks and dog and cat pugmarks.

A mosaic track made by Converse All Stars high-tops was common—not quite the variety of spoor seen around the watering holes of the Serengeti Plain of Africa but interesting enough to us.

There were two more possible revenue sources on the Township Square that needed investigating. Off we flew, pretending to be Spitfire pilots on a sortie. Larry skidded to a landing by the payphone and poked a dirty finger into the change return. As usual, nothing. My hopeful reach into the cannon barrel found an old paper lunch sack, but no empties.

The September sun was setting a pumpkin orange, throwing our shadows across the village street as we headed home on our bikes. Walking toward us was a group of four upperclassmen. A dirt clod burst on the pavement nearby, so Larry and I zigged and zagged down the middle of the street. The sissy-armed boys pretended to throw rocks our way, missing us by a mile.

They bragged that they were going up the water tower as we passed on the far side of the roadway. Larry met my glance and shook his head. Climbing the water tower was the crown jewel of delinquent acts in our hometown. To climb to the see-through wire to the circular catwalk, up ten feet along the tower’s reservoir and backward over the roof’s edge, onto the ladder and up to the smooth steel of the conical roof—This was to attain unquestioned bravery, and stupidity.

In my later years at the high school, the largest crowds on Monday mornings before first hour flocked to the lockers of the legendary daredevils who regaled their audiences with tales of their weekend feats of victory over the constant tug of gravity and authority. For others, leaving their spray-painted mark validated their water tower claims.

It didn’t take much of a handwriting expert to name the vandal who had used a paint roller to write his initials on the tank. Authorities made sure the common-sense-challenged climber never made it to school for his well-deserved Monday brag. The day’s light was slipping away. The two of us raced and coasted our bikes toward home. From a half mile away, we saw the dark cloud of blackbirds high over the crossroad. The flock bridged from the northern to the southern horizon and darkened the blue sky. This long, fingerlike flock had been flying overhead all afternoon.

“How many blackbirds do you think are up there?” Larry asked.

All I could think of was a billion and said so.

“What’s after a billion?” he asked, and we stared up at the chattering birds. 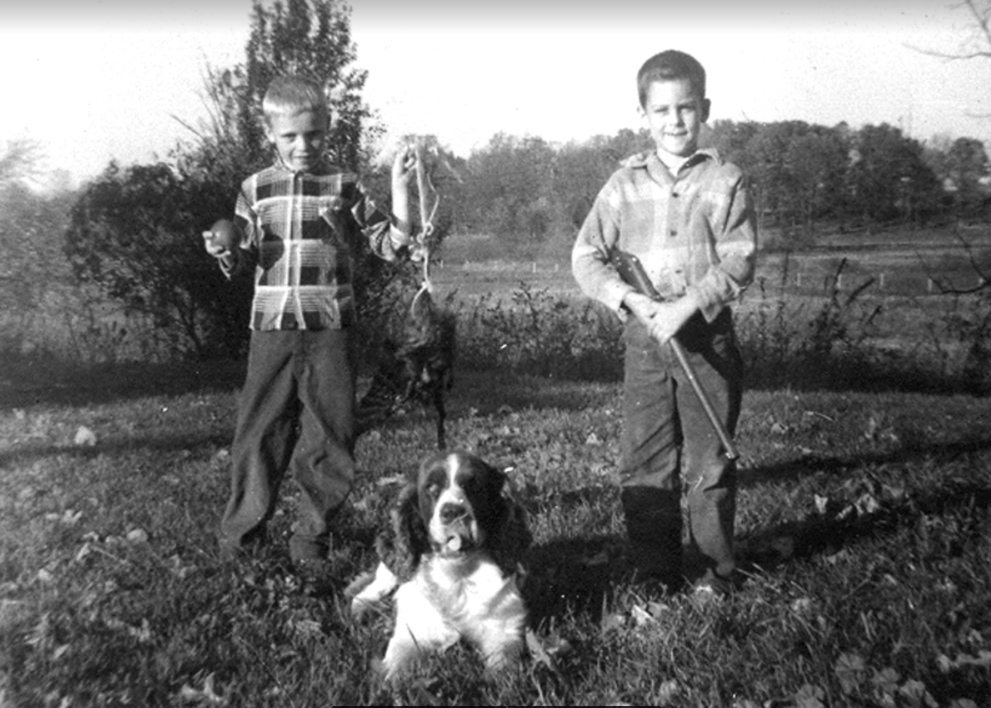