The Stockbridge football team came up with a defensive stand in the final minute of play to hold on to beat Brooklyn Columbia Central 36-28 Friday night in the first round of the D6 playoffs.

The win was the first playoff win for the Panthers since 2010 when they beat Onsted.

The game came down to the final minute with the Panthers leading by eight. Columbia drove to the Panthers four yard line with 1:24 left. The Eagles tried three straight runs that the Panthers stuffed setting up fourth down from the seven with just seconds to go. Brooklyn tried a slant pass into the end zone and the receiver was open for a split second, but freshman Drew Robinson reached in from behind as the ball got there and knocked it away to give the Panthers the win. 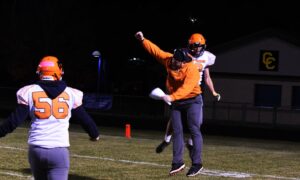 Coach Matt Kunzleman celebrates with Drew Robinson after he broke up the pass in the end zone in the final seconds to clinch the win for Stockbridge. Photo by Pam Mackinder

The Panthers took an early lead on a six-yards touchdown run by Riley Kennedy. Jeremy Pilch ran in the two-point conversion for an 8-0 Panther lead.

Columbia answered with a TD run an two-point conversion to tie it at 8-8 after one quarter.

The Panthers owned the second quarter putting up 20 straight points.

Kevin Killinger scored on a 60-yard TD run for a 14-8 lead, followed by 38-yard TD pass from Drew Philipp to Noah Robidou to make it 22-8 after a Kennedy two-point run.

Columbia threatened deep in Panther territory, but Pilch stepped in front of a pass at the goal line and returned it 100 yards for a pick-6 and a 28-8 halftime lead.

The Eagles made a game of it with a TD run in the third and another score to start the fourth to cut the lead to 28-22.

Kennedy busted free for a 69-yard TD run to answer the Eagles run and a Pilch two-point run extended the lead to 36-22, but Columbia wasn’t done.

The Eagles scored on a 39-yard run to cut the lead to 36-28, setting up the exciting finish.

Kennedy had a huge night with 175 yards on 17 carries and two scores. Killinger added 69 yards on four carries and a TD, while Philipp rushed for 18 on eight carries. Philipp was 3-12 passing for 44 yards and a TD. Robidou caught two passes for 41 yards and a score and Killinger one for three yards.

Philipp and Dom Hamlett were in on nine tackles each to lead the defense, while Pilch and Robidou had seven each.

The Panthers improved to 3-4 overall on the season. They return to action in the district semifinals Friday night against Jonesville (6-1) in a rematch of  week five that Jonesville won 48-18. The game was much closer then the final score as the Panthers led at halftime, but ran out of gas late.