While out for a winter walk with my husband and puppies last week, Scott glanced down and spotted this little guy. A turtle out for a stroll in January? It looked a little strange to us, so I picked him up. Turns out the poor creature had some chunks missing from its top shell and a puncture on its underside.

I couldn’t leave Oscar in the frigid cold —Yes, I named him, lol—so I brought him home. When I touched his feet, there was no response, so I wasn’t sure if he was alive. Then, eventually, he started to respond. After a couple of hours he poked his head out a bit. Yea! Oscar was alive.

On recommendation, I contacted the Howell Nature Center and told them about Oscar. The folks there asked me to bring him in, and Katlyn (What an awesome gal.) came to our car to fetch him. I asked her if she knew what kind he was and what might have happened to him.

Oscar probably hadn’t burrowed deep enough into the ground, she explained, and a raccoon or a possum dug him up and gnawed on him. As for what kind of turtle he is, turns out our Oscar is pretty special. He’s a Blanding’s turtle.

According to Wikipedia, “a Blanding’s turtle is a semi-aquatic turtle of the family Emydidae. This species is native to central and eastern parts of Canada and the United States. It is considered to be an endangered species throughout much of its range.”

The Ontario Nature website, “Habitat,” states, “Blanding’s turtles, which inhabit shallow lakes, ponds and wetlands with clean water and mucky bottoms, make the largest overland movement of any Ontario turtles, travelling up to several kilometers between summer habitat and nesting sites or overwintering habitat. This species hibernates in the soft bottoms of water bodies. Particularly in the spring, the Blanding’s turtle basks on rocks, logs or substrates in sunny locations.”

Thanks to the incredible people at the Howell Nature Center, Oscar is on antibiotics and pain killers and doing well. He has a safe, warm home for the winter, and Scott and I will be able to check his progress. Hopefully, we will be the ones to release him back to his habitat this spring. 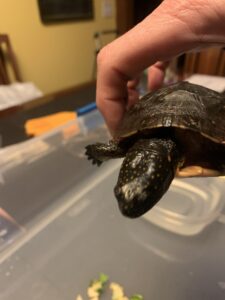 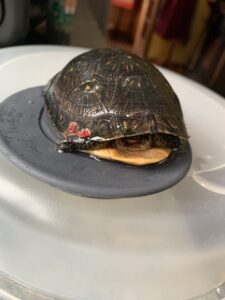 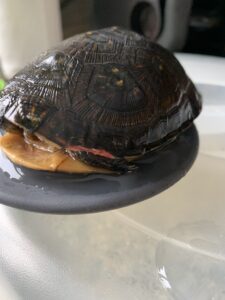