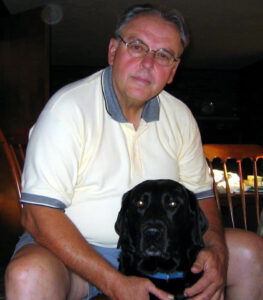 Brian G. Woolcock, age 79, of Stockbridge, MI, passed away on Sunday, December 13, 2020 in Lansing, MI at Robinwood Landing Alzheimer’s Special Care Center. He was born on October 25, 1941 in Pontiac, MI, the son of Horace G. and Florence M. (Eustice) Woolcock. On April 18, 1964, he married Vicki S. (McLaughlin) and she survives. For Brian, family was always first. He moved to the area in 1969 with his wife and oldest son, James. It was here that the four boys were raised on a family farm. He also loved teaching, and served as an educator at Walled Lake Central High School for most of his 36-year career. In addition, Brian taught Drivers’ Education for most of his career, both at Walled Lake Schools and Stockbridge High School. Besides spending time with family, his favorite pastimes included hunting (pheasants with his Labradors—including Darci; deer; rabbits with beagles), traveling to the cottage on the Betsie River in Thompsonville (where he often attended performances at Interlochen Arts Academy), and farming/enjoying nature on the 47 acres of farmland north of Stockbridge. Survivors include his wife, Vicki; four children, James Woolcock of Mason, MI, Michael (Raja) Woolcock of Paris, FR, Dean (Susana) Woolcock of Okemos, MI, and Mark (Lindsay) Woolcock of Douglas, MI; and five grandchildren, Idriss, Helen, Ewan, Esther, and Laura. Per Brian’s wishes, cremation has taken place, and a memorial service is private. Expressions of sympathy may be made to the Interlochen Center for the Arts or the Grand Traverse Regional Land Conservancy. Arrangements by Caskey-Mitchell Funeral Home, Stockbridge.