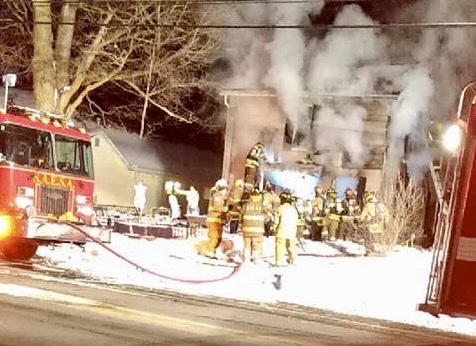 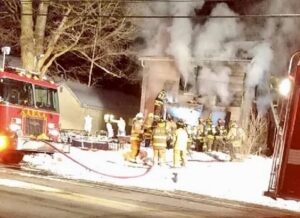 Around 9:30 p.m., Wed., Feb. 17., firefighters from four departments were called to the scene of a fire at the 800 block of S. Clinton St. in downtown Stockbridge. They found the home ablaze.

“We managed to put the fire out,” said Russell Stowe, Fire Chief with the Stockbridge Area Emergency Services Authority (SAESA).

According to Facebook postings, firefighters were temporarily trapped in the fire.

“We had an incident that involved a couple of Dansville firefighters when the upstairs floor buckled under them,” Stowe explained. “They dusted themselves off, and they went right back on the job.”

The homeowner and firefighters’ names were unconfirmed at the writing of this article. Stowe indicated Stockbridge, Dansville, Henrietta, and Unadilla fire departments were dispatched to the scene along with manpower support from Leroy township. The cause of fire, he said, is under investigation.

The home, the private residence of a local woman, suffered extensive damage to its first and second floors.

According to the Facebook page, Stockbridge Mi Area News & Info, “Marie, known for her display of mannequin art, has lost everything.” A GofundMe account was created in a show of support.

Firefighters stayed on the scene 2 ½ to three hours as temperatures dropped to 7 degrees. “It was cold,” Stowe said. “I’ll tell you that.” 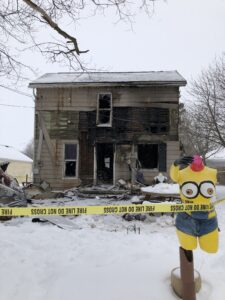 One of the home’s controversial mannequins, oblivious to the charred landscape behind her, appears to wave a greeting to passersby while anchoring the yellow “Fire line do not cross” tape..Photo credit: Patrice Johnson 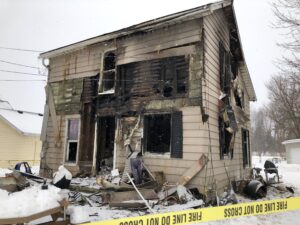 Editor in Chief of Stockbridge Community News. Author of national award winning, "The Fall and Rise of Tyler Johnson"