Stockbridge junior Rylee Tolson made school history last year by becoming the first female runner in Stockbridge to win cross country state title and has her sights set on a repeat Saturday at the Division 3 State Finals at Michigan International Speedway in Brooklyn.

While Tolson is the returning Division 3 champion, the road to the repeat will be a tough one. Not only will everyone be gunning for her, she has some stiff challengers, including the two-time defending Division 4 state champion Abby VanderKooi from West Michigan Christian, who has ran two races under 17:00 minutes this season. They have not faced each other on the cross country course, but did race against one another at the 2019 track finals in the 3200 which VanderKooi won and Tolson finished third. 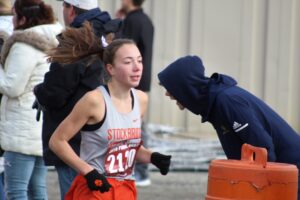 One thing standing between the two runners is that they will not get to race head-to-head due to a change in this years state finals. The MHSAA has separated the state finals into two races and will merge the times together for the final standings. Tolson and the Stockbridge girls’ team finished second in their region and will run the second D3 race of the day with all the first and second place Regional teams. The third place teams and individual qualifiers will run the first race of the day, which is where VanderKooi will be racing, which is a disadvantage for Tolson. She is one of the smartest runners in the state and knows how to run with the best as shown in last year finals where she did not have the fastest time going in, but ran her race and came out in front.

One person that Tolson will be competing with in her race will be Lani Bloom from Ithaca. Bloom has the second fastest time in D3 heading into Saturday’s race. She won the Division 2 race at the Greater Lansing Invitational, while Tolson won the D3 race.

Tolson will enter the race about where she was seeded last year. She has the sixth fastest time in D3 going into the Finals, behind VanderKooi, Bloom, Allison Chmielewski of Roscommon, Faith Smith of Lumen Christi, and Alyson Enns of Hart. She beat three of the runners in last years finals (Chmielewski, Smith, Bloom) with VanderKooi being in D4 and Enns being just a freshman.

While times vary due to the types of courses that runners compete on during the season, with her knowledge on the course and studying her opponents, it would be surprising to see Tolson right there in the hunt for the top spot in Division 3 once again Saturday.